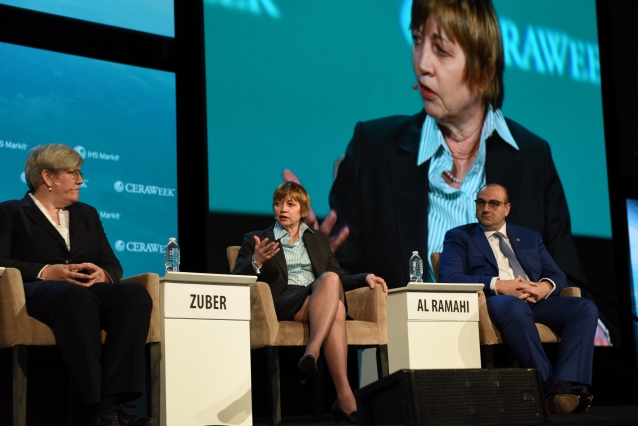 In a time of political transition and uncertainty in the U.S. and abroad, questions inevitably arise about the future of the energy sector. How will the shift to a low-carbon economy play out? How much has the timeline been impacted? These questions were on the minds of many of the attendees gathered in Houston earlier this month for IHS CERAWeek, the annual conference of the international energy industry. The conclusions were both realistic and optimistic, and marked by one of the defining characteristics of the week: momentum.

For a decade, MIT has played a substantial role in this conference. This year, MIT speakers included Vice President for Research Maria Zuber, the E.A. Griswold Professor of Geophysics in the Department of Earth, Atmospheric and Planetary Sciences; MIT Energy Initiative (MITEI) Director Robert Armstrong; and several other researchers, who took part in the weeklong program that also featured Canadian Prime Minister Justin Trudeau; Laurence Tubiana, CEO of the European Climate Foundation (ECF); Patricia Espinosa, executive secretary of the United Nations Framework Convention on Climate Change; and executives from major energy companies, among others.

This future in which carbon emissions have been substantially reduced is one that a number of speakers from diverse backgrounds heralded as inevitable, and more than that, desirable.

Coupled with this momentum towards low-carbon energy was a clear interest in the technology that will make it possible. MIT representatives at CERAWeek took part in lively discussions among the many alumni in attendance — whose free participation was facilitated by MITEI Associate Director Louis Carranza and the MIT Club of South Texas — or speaking on panels. Robert Stoner, MITEI’s deputy director and the director of the Tata Center for Technology and Design, spoke at a Thursday morning panel on developing markets for powering economic development. Karthish Manthiram, an assistant professor of chemical engineering, spoke about the role of carbon capture, utilization, and storage in a low-carbon energy future. PhD candidate Jesse Jenkins, a researcher in engineering systems in the Institute for Data, Systems, and Society, took part in a panel on distributed resources’ relationship to the evolution of the power grid.

At a plenary session on climate and energy strategies post-Paris Agreement, MIT’s Zuber reminded the audience that a wide range of technologies are needed to effectively combat the climate challenge, saying, “There isn’t any one silver bullet here.” She added, “We have very separate challenges that are associated with the developed world and the developing world. We need to be investing in a range of clean technologies.” Zuber’s fellow panelists included Mohamed Jameel Al Ramahi, CEO of Masdar; Rachel Kyte, CEO and special representative of the UN Secretary-General for Sustainable Energy for All; and ECF’s Laurence Tubiana.

Spinach emails, electric cars, and the future of silicon

Armstrong moderated Friday’s MIT plenary, “Frontiers of Science and Innovation: Future technologies to meet the energy and climate challenge.” He kicked off Friday’s panel with his co-moderator, IHS Markit Vice Chairman Daniel Yergin, by talking about MITEI’s developing Low-Carbon Energy Centers. Armstrong described the centers as a vehicle “to bring research in different disciplines together with industry to accelerate progress in the energy transition.” MIT panelists discussed how each of their research projects is contributing to low-carbon energy solutions.
Panelist Michael Strano, the Carbon P. Dubbs Professor of Chemical Engineering at MIT, brought up a video of a small spinach sprout growing in a beaker in his team’s lab, its roots wrapped in cheesecloth. “We’re going to watch this spinach plant send an email,” Strano announced to the audience.

In the video, a researcher’s hand depressed a yellow-colored solution into the water in the spinach plant’s beaker. Mere seconds later, thanks to a simple electronic setup already in place that connects the spinach’s solution electronically to a Raspberry Pi computer, an email showed up on the researcher’s phone.
“The idea,” Strano said, “is to replace some of the electronic devices and gadgets around us with a functional living plant. We’re working out the engineering details of how you would do this with nanotechnology.” The spinach sending the email? That’s Strano’s team’s answer to the need for sensors to detect potential toxins in soil or in the atmosphere. Plants already take in an immense detail of data about their surroundings, so Strano’s team had the idea of turning a plant (any plant will do) into a sensor of sorts, that, via a simple setup like the one he displayed in the video, can send periodic updates on the soil or air quality around it. An added benefit is that plants are “doubly negative” when it comes to carbon — both made of carbon and constantly consuming it.

The panel turned from replacing electronics with plants to improving the electronics themselves. Troy Van Voorhis, the Haslam and Dewey Professor of Chemistry, discussed his research into improved silicon in solar cells and technology for storing energy in chemical bonds. David Keith, the Mitsui Career Development Professor and Assistant Professor of System Dynamics at MIT’s Sloan School of Management, focused on electric cars. According to Keith, the widespread adoption of both electric and driverless cars will ensure that “driving will be safer, easier, cheaper, kinder to the environment.” First, though, certain barriers to adoption must be scaled. Keith discussed ways in which these challenges, from high costs to a need for greater proliferation of recharging infrastructure, can be overcome.

Investing in energy research for the future

In the post-Paris Agreement panel, Zuber discussed nuclear energy, describing innovations such as advances in molten salt reactors that will make the fission process safer, cheaper, and more efficient. She also addressed the common, half-joking criticism of fusion: that it’s always at least four decades away. “There’s been serious progress on this front, mainly due to technology innovations, particularly in the area of high-temperature super-conducting magnets. I frankly think that we are on the order of 10 years from net positive energy for a small compact reactor, not 40 years away. Once we get that, then we commercialize, and then we have a brand new industry. Then we have a completely different game.”

“It’s a combination of investment in R&D and patient capital to mature these ideas so we can get them out,” she said. “We’re at the cusp of a revolution.” 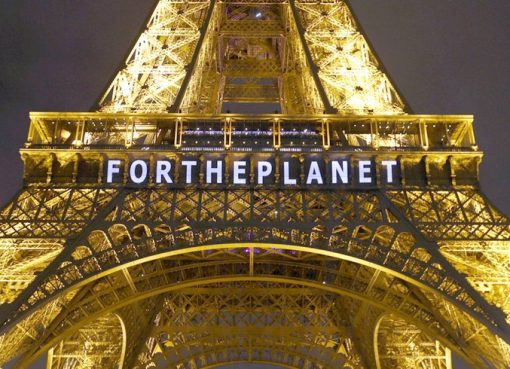