Fossil fuel companies risk wasting up to $2.2 trillion in the next decade, threatening substantially lower investor returns, by pursuing projects that could be uneconomic in the face of a perfect storm of factors including international action to limit climate change to 2˚C and rapid advances in clean technologies, think tank the Carbon Tracker Initiative warns today.

No new coal mines will be needed, oil demand will peak around 2020, and growth in gas will disappoint industry expectations, it finds in a new report highlighting the danger zone between industry business-as-usual strategies and action that would be needed to meet the UN commitment to limit climate change to 2˚C.

The $2 trillion stranded assets danger zone: How fossil fuel firms risk destroying investor returns, maps out coal, oil and gas supply that makes neither financial nor climate sense in a 2˚C world and how this affects both listed and public companies. The report warns: “If the industry misreads future demand by underestimating technology and policy advances, this can lead to an excess of supply and create stranded assets. This is where shareholders should be concerned – if companies are committing to future production which may never generate the returns expected.”

James Leaton, head of research and co-author of the report, said: “Too few energy companies recognise that they will need to reduce supply of their carbon-intensive products to avoid pushing us beyond the internationally recognised carbon budget. Clean technology and climate policy are already reducing fossil fuel demand – misreading these trends will destroy shareholder value. Companies need to apply 2˚C stress tests to their business models now.”

The companies that represent the biggest risk in a demand misread to the climate and shareholders alike in the next decade are a mix of state and listed companies, including oil majors Royal Dutch Shell, Pemex, Exxon Mobil, and coal miners Peabody, Coal India, and Glencore. Around 20-25% of oil and gas majors’ potential investment is on projects that will not be needed in a 2˚C scenario, and cancelling them would mean going ex-growth.

The report looks at production to 2035 and capital investment to 2025. It warns that energy companies must avoid projects that would generate 156 billion tons of carbon dioxide (156Gt CO2), in order to be consistent with the carbon budget in the International Energy Agency’s 450 demand scenario, which sets out an energy pathway with a 50% chance of meeting the UN 2⁰C climate change target.

Mark Fulton, advisor to Carbon Tracker, former head of research at Deutsche Bank Climate Change Advisors, and co-author of the report, said: “Our work shows thermal coal has the most significant overhang of unneeded supply in terms of carbon of all fossil fuels on any scenario. No new mines are needed globally in a 2˚C world.”

Carbon Tracker warned last month that big energy companies are ignoring rapid advances in clean technologies which threaten to undermine their business models, such as renewables, battery storage and electric cars, in a report[1] challenging nine business as usual assumptions made by the industry to argue that coal, oil and gas will all continue to grow in the next decades.

Anthony Hobley, CEO of Carbon Tracker, said: “Business history is littered with examples of incumbents[2] who fail to see the transition coming. Fossil fuel incumbents seem intent on wasting capital trying to hold onto growth by doing what they have always done rather than embracing the energy transition and preserving value by adopting an ex-growth strategy. Our report offers these companies both a warning and a strategy for avoiding significant value destruction.”

COAL – In a 2˚C world, demand can be met from existing mines and no new mines will be needed. “It is the end of the road for expansion of the coal sector,” the new report states. Over the next decade, capital expenditure of $177 billion on new projects and $42 billion on existing ones is unneeded.

China, the US, Australia, India and Indonesia have the greatest exposure, accounting for over 90% of unneeded investment. Export markets are in structural decline as China seeks to peak its coal demand and India aims to become more self-sufficient in energy, threatening big exporters like Australia and Indonesia. In the US half of all potential projects from Peabody, Murray and Foresight will be unneeded.

OIL – “In the 450 scenario oil demand peaks around 2020. This means the oil sector does not need to continue to grow, which is inconsistent with the narrative of many companies,” the report states. Spending of $1.3 trillion on new projects and $124 billion on existing projects is unneeded. Overall 43% of investment in new projects and 33% of new supply should be avoided to align with a 2˚C scenario, avoiding 28Gt of CO2.

The countries with the greatest financial exposure are the US, Canada, Russia, Mexico and Kazakhstan. The biggest risk is from shale oil in the US, oil sands in Canada and conventional oil in Russia. All three, with Norway, are exposed to Arctic oil. Deep water projects in the US and Mexico and Venezuela’s heavy oil are also in the danger zone. However, OPEC conventional production faces little risk due to its low cost.

GAS – In a 2C world gas growth will be “at a lower level than expected under a business as usual scenario”, the report finds. Capital expenditure of $459 billion on new projects and $73 billion on existing projects is surplus to requirements. Overall 41% of investment in new projects and 25% of new supply, accounting for 9 Gt of CO2, is unneeded.

The US, Australia, Indonesia, Canada and Malaysia have the greatest exposure, accounting for three-quarters of investment risk. Within the markets we analyse (North America, Europe, and the LNG export market), two-thirds of new coal bed methane and Arctic projects are in the danger zone; half of the supply in new LNG projects is unneeded and very little new capacity will be needed in the US and Canada in a 2˚C scenario.

CARBON CAPTURE AND STORAGE – Carbon Tracker’s analysis assumes 24Gt of CO2 will be captured by CCS by 2035 in line with the IEA 450 scenario, but it warns that this would require CCS to grow to a level 150 times where it is today. Delays in CCS could significantly increase the reductions in coal that will be needed and the IEA has estimated that a 10-year delay in large-scale CCS deployment from 2020 to 2030 could cost fossil fuel producers $1.35 trillion in lost revenues. 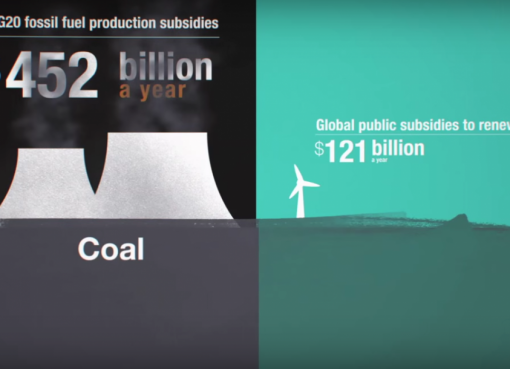