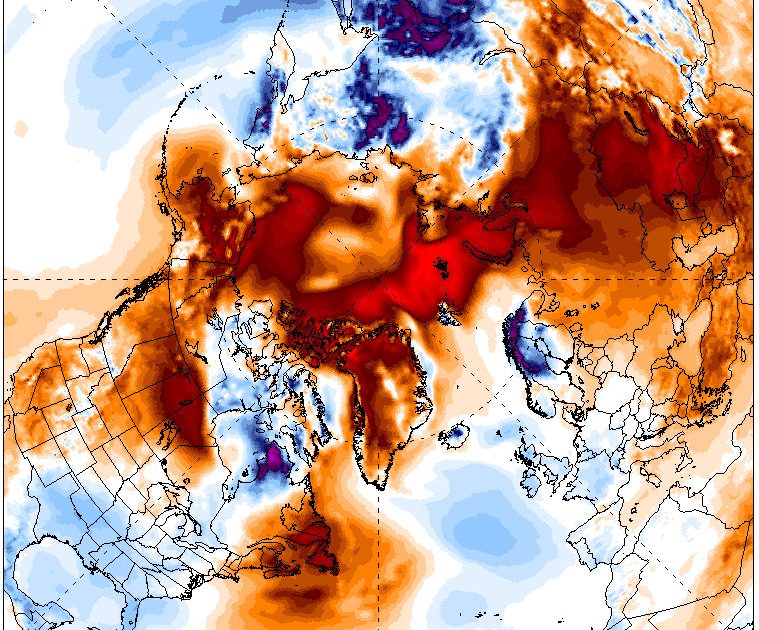 While the Eastern United States simmered in some of its warmest February weather ever recorded Tuesday and Wednesday, the Arctic is also stewing in temperatures more than 45 degrees above normal. This latest huge temperature spike in the Arctic is another striking indicator of its rapidly transforming climate.

On Monday and Tuesday, the northernmost weather station in the world, Cape Morris Jesup at the northern tip of Greenland, experienced more than 24 hours of temperatures above freezing according to the Danish Meteorological Institute.

“How weird is that?” tweeted Robert Rohde, a physicist and lead scientist at Berkeley Earth, a non-profit organization that conducts analyses of the Earth’s temperature. “Well it’s Arctic winter. The sun set in October and won’t be seen again until March. Perpetual night, but still above freezing.”

The Danish Meteorological Institute wrote that only twice before had it measured temperatures this high during February at this location, in 2011 and 2017. It is a mere 400 miles from the North Pole.

This thaw occurred as a pulse of extremely mild air shot through the Greenland Sea.

Warm air is spilling into the Arctic from all sides. On the opposite end of North America, abnormally mild air also poured over northern Alaska on Tuesday, where the temperature in Utqiaġvik, previously known as Barrow, soared to a record high of 31 degrees (minus-1 Celsius), 40 degrees (22 Celsius) above normal.

The warmth over Alaska occurred as almost one-third of the ice covering the Bering Sea off Alaska’s West Coast vanished in just over a week during the middle of February, InsideClimateNews reported. Brian Brettschneider, a climatologist based in Alaska, posted that the overall sea ice extent on Feb. 20 was the lowest on a record by a long shot.

The lack of ice has real consequences for villages along the Bering Sea whose shores are normally protected from big storms and their giant waves. Without the ice as a buffer, waves can hammer the coastline and damage homes and buildings, as this video from the village of Diomede, Alaska, shot on Feb. 20 illustrates:

Temperatures over the entire Arctic north of 80 degrees latitude have averaged about 10 degrees (6 Celsius) above normal since the beginning of the calendar year. These kinds of temperature anomalies in the Arctic have become commonplace in winter in the past few years. “[T]he *persistence* of the above average temperatures is quite striking,” tweeted Zack Labe, a PhD candidate in climate science at the University of California at Irvine.

As of Friday, the whole region had spiked more than 35 degrees (20 Celsius) above normal, which Labe called a “truly remarkable event” and the warmest in February ever recorded.

Some of the most extreme warmth of the year so far is forecast to flood the Arctic this weekend, with a number of areas seeing temperatures 45 to 60 degrees (25 to 34 Celsius) above normal. The mercury at the North Pole could well rise above freezing.

This next batch of abnormally warm air is forecast to shoot the gap between Greenland and northern Europe through the Greenland and Barents seas. Similar circumstances occurred in December 2016, when the temperature at the North Pole last flirted with the melting point in the dark, dead of winter. We documented comparable jumps in temperature in November 2016 and December 2015.

An analysis from Climate Central said these extreme winter warming events in the Arctic, once rare, could become commonplace if the planet continues warming. A study in the journal Nature published in 2016found the decline of sea ice in the Arctic “is making it easier for weather systems to transport this heat polewards.”

Arctic sea ice was at its lowest extent on record this past January, according to the National Oceanic and Atmospheric Administration.

“I have sailed boats through [the Arctic Sea] but never this time of year,” tweeted David Thoreson, an Arctic photographer. “It’s amazing to watch this unfold.”

The record-setting temperatures and lack of ice is exactly what scientists have projected over the Arctic for years and it’s fundamentally changing the landscape.

“Arctic shows no sign of returning to reliably frozen region of recent past decades,” NOAA concluded in its Arctic Report Card, published in December.

Correction: This post originally incorrectly identified Robert Rohde as a physicist at the University of California-Berkeley. Rhode completed his Ph.D. there but is presently employed at Berkeley Earth. The appropriate text was modified.