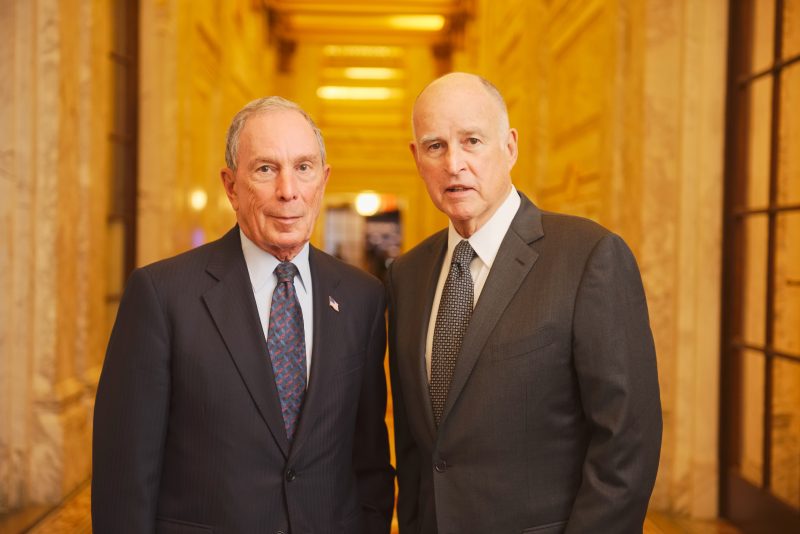 The United Nations should give a “seat at the table” to a powerful group of US states, cities, tribes and businesses that are committed to taking action on climate change, Michael Bloomberg has urged.

In an apparent bid to circumvent US president Donald Trump’s moves to withdraw from the Paris accord, the billionaire philanthropist also said the world body should accept an alternative set of US climate commitments alongside national pledges to reduce carbon emissions.

The former New York mayor was speaking at the UN’s climate change conferencein Bonn, Germany, during the launch of the America’s Pledge report. The report has found that US states, cities and businesses that have signed up to reduce greenhouse gas emissions together represent a GDP of about $10tn. That is more than any nation except the US and China.

“If this group were a country, we’d be the third-biggest economy in the world. We should have a seat at the table,” Bloomberg said. “If Washington won’t lead, then mayors and governors will.”

Bloomberg – who is also a UN special envoy for cities and climate change – was among a high-level alternative US delegation that included Californian governor Jerry Brown, four senators, several mayors and representatives of major US corporations. Together they claim to represent a majority of people in the US.

“The American government may have pulled out of the Paris accord but the American people are still committed to its goals,” Bloomberg said. “And there is not a thing the government can do to stop us.”

The rival US group have overshadowed the muted official US delegation, which has shown the priorities of the Trump White House by scheduling a meeting at the talks focusing on the future of coal.

The packed America’s Pledge launch event took place in the US Climate Action Center, an inflatable dome that the alternative US delegation is using as its headquarters. Although it is outside the official conference hall, its close proximity, huge space and packed crowds highlighted the high status of the rival body.

It also got a top-level endorsement from the organisers. “They may be non-state actors, but they are leaders in this process. America’s Pledge sends a powerful message to the world that America is still in the game,” said Frank Bainimarama, the prime minister of Fiji, which is the president of this year’s UN conference.

Patricia Espinosa, executive secretary of UN Framework Convention on Climate Change, said she would take the report to the official parties at the conference centre. “We’re standing at the edge of something truly special,” she said in an upbeat assessment of the progress made so far in the US and elsewhere on the adoption of clean energy such as wind and solar. She said the world was moving from the information age to the “age of renewal.”

In an atmosphere often reminiscent of a campaign rally, Senator Ed Markey, a Democrat from Massachusetts, said the solar industry in the US had created 50,000 jobs in 2016 – equivalent to the entire coal mining industry – and that the renewable industry as a whole would employ half a million workers by 2020. “This is the greatest blue-collar job creation in two generations,” he said.

Many major US corporations have also signed up to the campaign. Laura Phillips, senior vice-president of sustainability at Walmart, said a transition to clean energy made economic sense.

She said the world’s biggest retailer had enough solar cells on its supermarkets to cover 190 football fields and had saved $1bn in fuel bills: “It’s good for business, it reduced emissions and it’s good for our community.”

But critics argue carbon trading and massive investments in technology do not deal with the root causes of the problem, which are overconsumption and capitalism. The event was interrupted by protesters who raised banners declaring “False Solution for the Planet” and chanted “We are the solution. Don’t trade pollution!” in reference to California’s carbon cap-and-trade scheme.

In a raucous five-minute exchange with the hecklers, Jerry Brown accepted that governments need to do more, but he said it was necessary to make the transition in stages rather than all at once.

“That is good noise,” he said to the chanters. “But it doesn’t get the job done. You need a plan … the perfect can be the enemy of the better.”

Several speakers highlighted the progress made in their regions.

Pittsburgh mayor Bill Peduto said a blue-green alliance between labour unions and renewables companies had revitalised his city after the post-industrial decline of its traditional steel industry.

“Time goes in only one direction. If you wait for the mills and mines to reopen, you’ll be left in the past,” he said.

To view the original article from The Guardian, please click here

Countries Prepare How to Check Paris Progress in 2018